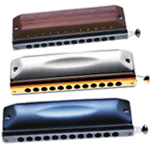 Show without VAT
The chromatic harmonica is a type of harmonica that uses a button-activated sliding bar to redirect air from the hole in the mouthpiece to the selected
reed-plate desired. When the button is not pressed, an altered diatonic major scale of the key of the harmonica is available, while depressing the button accesses the same scale a semitone higher in each hole.

Chromatic harmonicas are usually 12, 14 or 16 holes long. The 12-hole chromatic is available in 12 keys, but because the entire chromatic scale is available by definition, most professionals stick with the key of C—which is perhaps easier to remember, since slide in will automatically be the sharps of the associated note.

Chromatic harmonicas are traditionally tuned to solo tuning, which has a similar layout to the diatonic's Richter tuning except that it eliminates the G on the draw and doubles the Cs that are not on the ends of the instrument. In the standard 12-hole chromatic in C the lowest note is middle C, while 16-hole variants start one octave lower. For the 16-hole variant, the layout is usually as follows. Note that the "D" in the last key-in draw note is common, though by no means present in all chromatic harmonicas.