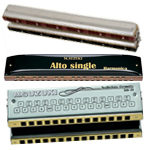 The chord harmonica has up to 48 chords: major, seventh, minor, augmented and diminished for ensemble playing. It is laid out in four-note clusters, each sounding a different chord on inhaling or exhaling. Typically each hole has two reeds for each note, tuned to one octave of each other. However, less expensive models often have only one reed per note. Quite a few orchestra harmonicas are also designed to serve as both bass and chord harmonica, with bass notes next to chord groupings. There are also other chord harmonicas, such as the Chordomonica (which operates similar to a chromatic harmonica), and the junior chord harmonicas (which typically provide six chords).

The Suzuki SSCH-56 Compact Chord harmonica is a 48-chord harmonica built in a 14-hole chromatic harmonica enclosure. The first three holes play a major chord on blow and draw, with and without the slide. Holes 2, 3, and 4 play a diminished chord; holes 3, 4, and 5 play a minor chord; and holes 4, 5, and 6 play an augmented, for a total of sixteen chords. This pattern is repeated starting on hole 5, a whole step higher; and again starting on hole 9, for a total of 48 chords.