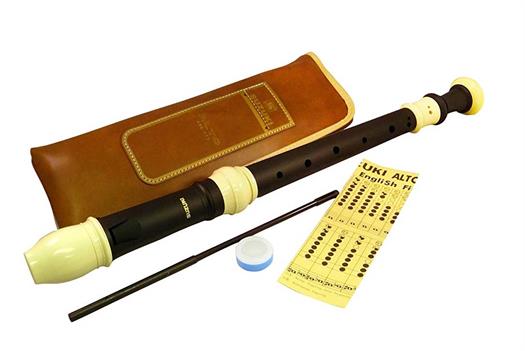 Show without VAT
If the two styles Baroque style (English style) and "German style are compared, the following differences in characteristics will be seen.
German Style have a large and small hole in the 4th & 5th. hole, and the Baroque Style (English) the other way around. The English style is most used in Scandinavia. The recorder is a family of woodwind musical instruments.

The recorder is first documented in Europe in the Middle Ages, and continued to enjoy wide popularity in the Renaissance and Baroque periods, but was little used in the Classical and Romantic periods. It was revived in the 20th century as part of the historically informed performance movement, and became a popular amateur and educational instrument.

The sound of the recorder is often described as clear and sweet, and has historically been associated with birds and shepherds. It is notable for its quick response and its corresponding ability to produce a wide variety of articulations. This ability, coupled with its open finger holes, allow it to produce a wide variety of tone colors and special effects. Acoustically, its tone is relatively pure and, when the edge is positioned in the center of the airjet, odd harmonics predominate in its sound (when the edge is decidedly off-center, an even distribution of harmonics occurs)