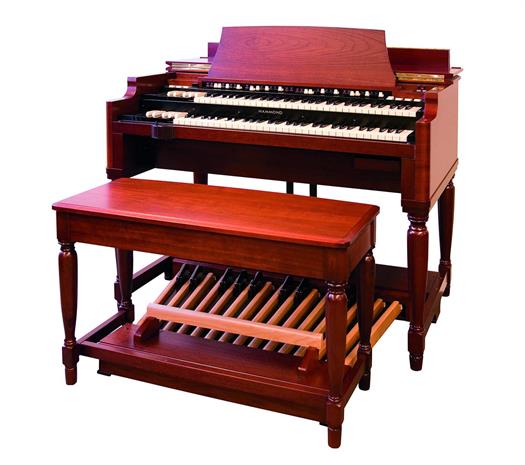 The Hammond organ is an electric organ invented by Laurens Hammond and John M. Hanert and first manufactured in 1935. Various models have been produced, most of which use sliding drawbars to vary sounds. Until 1975, Hammond organs generated sound by creating an electric current from rotating a metal tonewheel near an electromagnetic pickup, and then strengthening the signal with an amplifier to drive a speaker cabinet. The organ is commonly used with the Leslie speaker.

Around two million Hammond organs have been manufactured. The organ was originally marketed by the Hammond Organ Company to churches as a lower-cost alternative to the wind-driven pipe organ, or instead of a piano. It quickly became popular with professional jazz musicians in organ trios, small groups centered on the Hammond organ. Jazz club owners found that organ trios were cheaper than hiring a big band. Jimmy Smith's use of the Hammond B-3, with its additional harmonic percussion feature, inspired a generation of organ players, and its use became more widespread in the 1960s and 1970s in rhythm and blues, rock, reggae, and progressive rock.

In the 1970s, the Hammond Organ Company abandoned tonewheels and switched to integrated circuits. These organs were less popular, and the company went out of business in 1985. The Hammond name was purchased by the Suzuki Musical Instrument Corporation, which proceeded to manufacture digital simulations of the most popular tonewheel organs. This culminated in the production of the "New B-3" in 2002, a recreation of the original B-3 organ using digital technology. Hammond-Suzuki continues to manufacture a variety of organs for both professional players and churches.